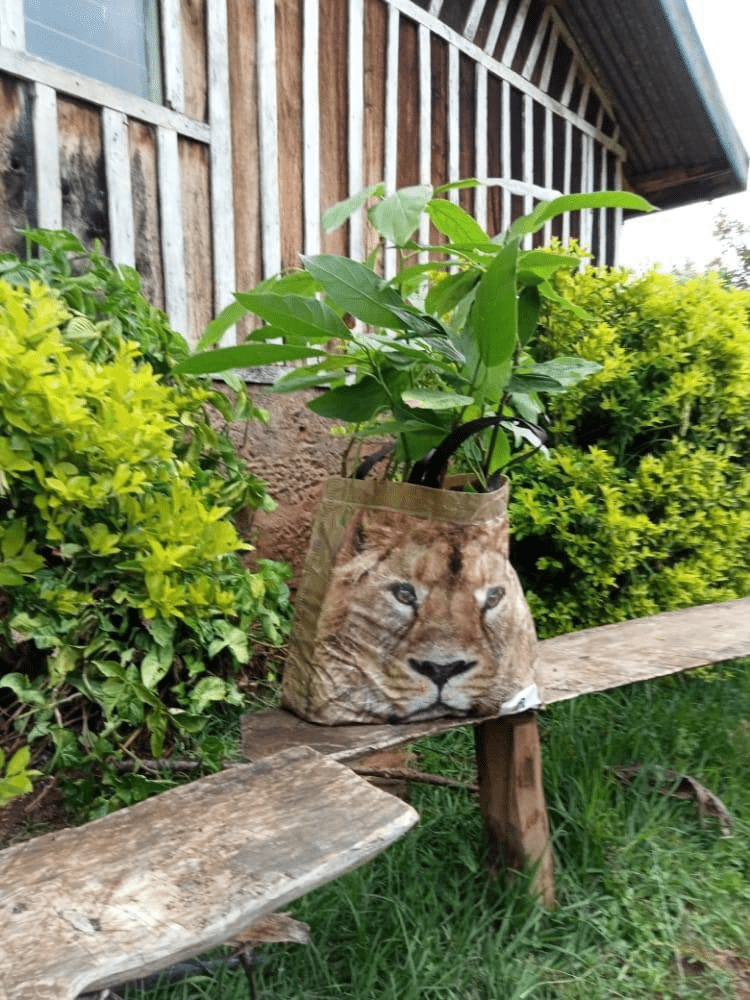 It is likely that if you saw that bag tucked in a thicket somewhere—first thing in the morning—you’d jump back in fright and probably call out for help. Because the bags have a printed face of an African Lion. Pleasing to the eye when you see it. But scaring when you think of it as a lion. In the morning, in your compound.

This was the case in Muritubu village, Meru County when a resident sported what looked like a lion hidden in a flowerbed. It is possible to imagine a lion hiding on the flowerbed because Meru National Park is not far away. Besides it is in the same region that a cow once "killed" a lion.

Imagine the scare of the caller and their frantic effort to look for a KWS number. Because let’s face it, nobody keeps a KWS number for when they will meet a lion strolling on the streets one day. People acquire it when they can’t avoid it.

Imagine the KWS officer that had the privilege if talking to the caller. In a shrilled shaky voice. Report that there was an immobile lion staring at them in the morning chill with every intention of having a human for breakfast.

Imagine the swiftness with which the KWS assembled a team, quickly checked their database for a lost lion, and advised the resident on what to do before a rescue team gets there. Maybe a crowd gathered. Curiosity. In the true nature of the village life, maybe a religious was informed of these unfolding events. To offer prayers and to enchant an entity on the community’s behalf.

KWS officers holding the shopping bag at the scene

The KWS was in the compound in no time once they received the distress call. The supposed lion was a planter that had growing fruit trees, in preparation for transplanting. A lion by any other name and shape is a lion.

It is impressive, however, how they responded to the scare. They did what is recommended. Notifying the KWS of the impending danger and seeking safety as one waits for their response. It was comical when the KWS posted on their socials of what had happened and jibed the retail shop to meet behind the tent which is street language for, “I need to talk to you urgently.” In their quick and witty response, Carrefour tweeted KWS, “hakuna haja ya kukutana nyuma ya tent, our bags are eco-friendly.”

KWS and a few other internet users turned it into a marketing opportunity with KWS encouraging Kenyans to Zuru Meru National Park to see real lions. Carrefour on their part, had cheesy message, “The Lion isn’t real, but our low prices are.”

To report any wildlife emergency please call this toll-free number always 0800 597 000. To get a Carrefour bag, well, go to Carrefour.